About the Toronto housing market

Signs of a slow down have emerged as tougher rules make it harder for some buyers to get a mortgage. Financing costs have risen for the first time in many years and some buyers are looking at rates unseen for 10 years. These financing costs have really hit the 1 million-plus condo market where some projects have tried to sell their projects as luxury units while not hitting the true super deluxe market that some high-end buyers look at when viewing the 1 million-plus market. When you compare the Toronto condo market’s top end to other international cities you can see the difference in sales. While Toronto new condo reports looks great for the lower end the luxury market is different because the buyers are very different. Some buildings take longer to sell in different parts of the city.

If units are not selling new condo projects are starting to include incentives to move units. Discounted parking is the most attractive offer but even a straight cash incentive is being used. Some of the incentives are being pushed to agents so they drive more clients to specific projects so the buyer might not even see the benefit just the buying agent.
Brokers in downtown Toronto are even seeing incentives for some resale units if the building has not been viewed as attractive as some other building in the downtown core. These resale units are usually units that have not even been lived in since investors but the units pre-construction and now they are selling since they took ownership. While being tracked as resale by TREB they should be viewed as new unit sales but not pre-construction.

Sales in the $500,000 range remain extremely competitive for the right building. This price point is within the range of most first time buyers since they can not find any homes in downtown Toronto in that price range. 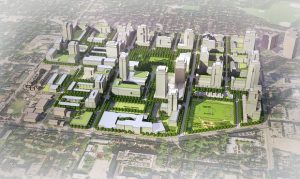 While some parts of the city might have seen a slump in condo sales projects along the waterfront has not been affected. A broader correction in the Toronto property market should be examined in local markets.

Some developers outside of the downtown core are trying to address a slowdown by allowing new buyers to stretch out their down payment period. While they still end up with a down payment in the 15 to 25 percent range they are allowed more flexible terms. That makes condo ownership more affordable for some people who might not have saved up $50,000 to meet the 10% initial deposit that some projects have traditionally requested when signing.

Investors have also slowed when it comes to absorption of new projects in some parts of the city. While it might be a simple question of buyer fatigue some investors might simply be waiting to get their money out of some buildings that are being completed which have taken longer than planned.

While prices for resale homes have decreased across the GTA on average downtown Toronto condo prices have continued to climb. While the speed of the increases has slowed down it has proved to be a better investment than some home investments in certain parts of the GTA. When looking at the year-over-year basis the condo market has increased by 8.3 percent and even greater in certain buildings and parts of the city.

The condo supply is increasing with the Canadian federal government housing agency saying work has started on over 7,000 units in the first quarter with that number the largest in many years. Those numbers include many popular building along the lakeshore in the west end of the city near Humber Bay.

Bridge over to Humber Bay area

At some point in the near future condos could be less appealing to investors. A large increase in numbers could stop the appreciation of units so investors could back away from the Toronto market.

Carrying costs for investors; which include; mortgage payments, property taxes and maintenance fees might not be matched by rental income. Plus the new Ontario government rent controls have made it harder for investors to increase their rental income once someone has moved into the unit. Although the investor can get more income if the tenant moves the incomes is limited by rent controls for existing tenants. Long-term negative cash flow is usually supported by the increase in property value but if supply limits the increase in resale market investors might want to exit the rental market and simply cash in on the value of the unit that they achieved over the past few years.