Popular Toronto areas that are growing

With over 50,000 people moving to Toronto every year the demand for housing continues to put pressure on the city. In the past, the city simply expanded outward with growth mostly determined by new roads.

By looking at historical records you can see how growth in Toronto happened by the spread of the Toronto Transit Commission expansion of streetcars. Then the growth of Toronto happened when the car culture started to dominate planning for expansion of real estate markets. Growth happened along major routes and the development of major highways allowed more housing along the 401 route.

Now with the limited ability to grow because of transit times for commuters development has started to turn inwards. Parts of Toronto are starting to develop even without new transit options.

The growth of the new subway line along Sheppard has seen the rapid growth of new condo developments in the area. Urban planners know that the new transit will lead to development but unfortunately, the Sheppard Line delivers people to the already crowded Yonge subway line.

These transit problems have helped create demand in other parts of the city including some areas close to downtown Toronto. Three areas have experienced large amounts of growth in the past few years.

The Leslieville area in the eastern part of Toronto was traditionally home to factory workers. When the factories started to move out some sites sat vacant for several years. 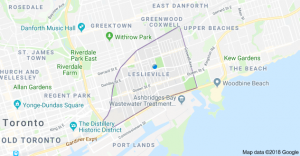 The history of the area is nicely covered on the https://leslievillehistory.com/ website has more details about the area.

In regard to housing, the growth of condos in Leslieville has rapidly changed the neighborhood. The growth of new residents has attracted new businesses to the area. The changes in the neighborhood demographics are reflected by the types of businesses that are appearing. The cluster of new restaurants with a slightly upscale menu and higher price points compared to older restaurants that used to serve the factory workers is very evident when walking through Leslieville.

Many of the new condos buildings are being built along Carlaw Ave that used have various factories. 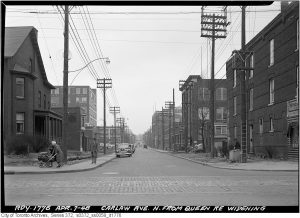 These condos were the first to appear in the area and many more have appeared with a few in other older factory buildings along Broadview Ave.

The Printing Factory Lofts is an obvious example. Located on Carlaw Avenue at 201 Carlaw Avenue which is located in an old factory. This building was one of the biggest employers in Toronto’s printing industry in the early part of the century. The building housed Rolph-Clark-Stone Limited, lithographers will be one of the largest graphic art firms in Canada. The building was modified and a large tower was built so the building now is home to several hundred residents. the building has been designated as a historic building by the City of Toronto.

One of the most historic buildings in Leslieville that has turned into housing was the Wrigley building which was used to make gum as the name suggests. Pract and Perrine, the architects for 245 Carlaw which was one of the first factories converted into housing. It did not receive an extensive remodeling so the units are more New York style lofts that condos. The windows for units are a good example of how little was done to convert the building to housing. The Wrigley Building was completed in the spring of 1916. It was in the Beaux Arts style used for the Chicago factory.  The same architects also built thee Palmolive Building across the street which has been torn down and replaced by the Showcase Lofts.

Another area that seen housing take the place of old factories in the area located at the end of King St East where it meets the Don Valley. It was home to many factories but they have all been removed and now housing is taking over the region. There is a beautiful park called the Corktown Common which also serves a flood protection for the area. The area sits in a flood plan and without some major improvements to the mouth of the Don River flooding can still occur in the area.

The River City housing development is an award-winning example of the new housing taking over the area. The development was lead by the company http://www.urbancapital.ca/ which is attracting great reviews for its project. 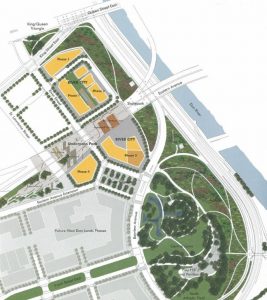 It has happened over several phases and the buildings have been called River City 1, River City 2 and River City 3. The last building in the development is called Harris Square and its located right beside the Canary condos which were used to house athletes for the Pan-Am games.

The design of the building has over 300 units and the design of building is very unique with it winning the Bild Award for Best Building Design. As part of the River City condo development its stands out as the highlight of the three buildings.

The buildings have been reselling for several years and demand keeps increasing. The close location to downtown means that many condo owners do not need cars and use public transit or can simply walk downtown. These buildings are part of the growth in the waterfront area. The River City development blends into the Canary District condo development. The Canary District was driven by the need to provide housing to the Pan-Am games in 2015. New buildings were built from the ground up. After the games the buildings had to been refinished but they have also proven popular in the condo resale market. The introduction of a new streetcar loop into the Canary District will help the development because transit is one factor that people examine when looking for condos. Many potential condo buyers will look at these building over condos in the west end because the King St streetcar in the western part of the city is overwhelmed with users.

Toronto waterfront is experiencing growth along Queen Quay with the eastern part of the street seeing industrial buildings being replaced by condos. The Bayfront development has already started. Google backed https://sidewalktoronto.ca/ development is one of the biggest developments to hit the eastern part of Toronto but the politics behind the process is causing delays. Waterfront Toronto officials attracted some negative press because of the development process with something that could easily add great value to the city. 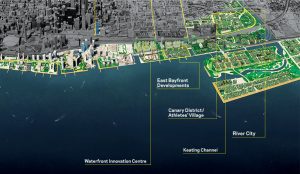